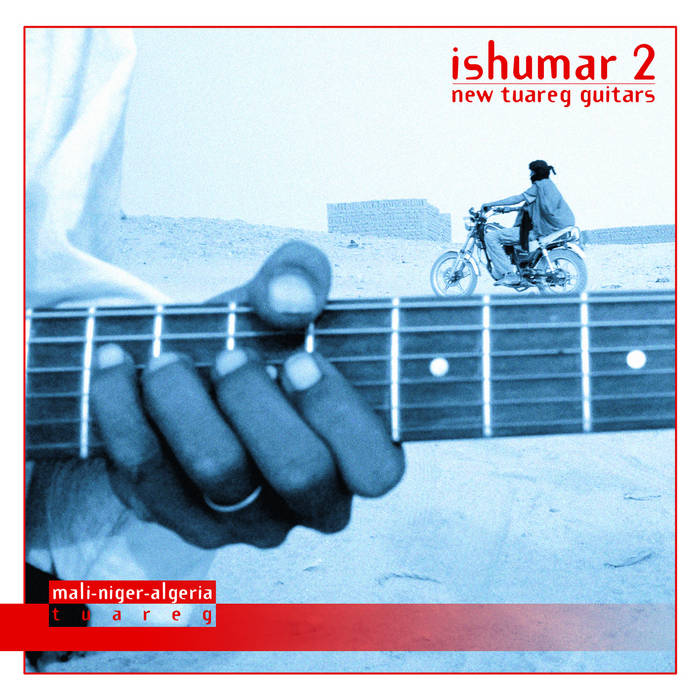 3 years after 'Ishumar, Music of the Tuareg Resistance', the French label Reaktion, specialising in music of the Sahara, releases a second volume as an overview of contemporary Tuareg music creation in 2011.

30 years ago, the group Tinariwen (Nothern Mali), revolutionised Tuareg music by introducing the electric guitar to support their songs of rebellion. At the beginning of the 2000's, the group began an international career with growing success: 4 studio albums; tours around the world; and prestigious collaborations (Robert Plant, Herbie Hancock,...).

Has this first success of a Tuareg band changed the situation for all the bands that have followed their model? Do their successors still dream of revolution, or rather of an international career? How can the Tuareg guitar evolve?
Although these evolutions are taking place at this very moment, the compilation 'Ishumar 2, New Tuareg Guitars' tries to provide some answers.

Tinariwen's shadow hangs over all 12 tracks on the album, but all these groups, from Mali, Niger or Algeria, have understood the need to move away from the original style. Like the current Tuareg youth who exchange mp3’s via bluetooth, these artists are open to the world and carry out bold hybridisation between Tuareg guitar and other music: rock (Tamkilwate), blues (Nabil Othmani), reggae and even a touch of rap (Amanar).
The instruments are diversified with the introduction of the drums (Amanar), keyboards (Moussa SIdi), or even classical instruments (Kel Assouf).

The main theme of this new wave seems to be “mixing”. Mixing not only styles and instruments, but also nationalities and cultures. One of the most remarkable phenomenons is the appearance of a real parallel scene of the Tuareg diaspora in Europe. Many musicians exiled in France and Belgium have created bands with non-Tuareg musicians, which evolved at the same time as the famous Ishumar guitar, which remains the basis (Atri N'Assouf, Ibrahim Djo Experience, Kel Assouf...).

The calls for armed struggle have been succeeded by, for example, awareness messages for peace, children’s education and union between different Tuareg confederations.

The album comes with a booklet including extensive presentations of the twelve bands and a long text by the Italian anthropologist Marta Amico.

A project conceived and produced by Sedryk