Ishumar - Music of the Tuareg Resistance 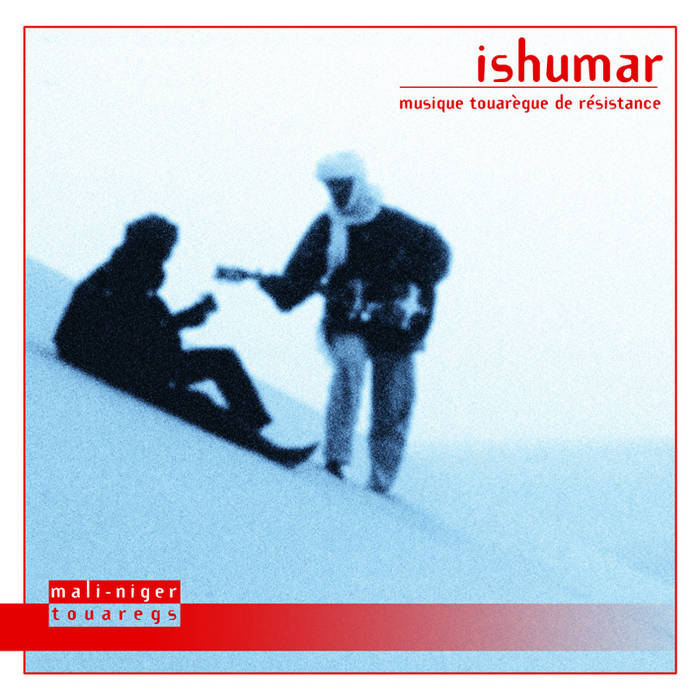 Lorena Moore Carefully chosen collection of mostly acoustic ishumar guitar, including some tracks unavailable elsewhere. A beautiful introduction to this music if you've never heard it, and a classic if you already love it. Favorite track: Mahi igdalan amerdeless.

‘Ishumar’ brings together the main protagonists of tishumaren music and poetry for the first time. The album portrays the present state of this music, with a selection of recordings, mostly previously unreleased, which have been made over the past decade.

Present, of course, are the founders of the style, who were the first to introduce the electric guitar into Touareg music: Intiyeden (whose songs are covered here by Terakaft) and Ibrahim Abaraybone, both founders of the group Tinariwen. Other historical members of Tinariwen are also featured: Kedou and Diara (now touring with Terakaft) and Mohamed Ag Itlal, better known as ‘Japonais’.
From Niger there are selections by Hasso Akotey, Hamid Ekawel or Koudede, who are well known musicians within their own community, although their music has yet to reach Western ears. Toumast and Etran Finatawa however have already started to break through abroad. The former offer up an original mix of ishumar guitars, western rock and funk.
The latter combine together in the same group elements drawn from both the Touareg and Fulani, two ethnic groups who share the same desert territory in the west of Niger.

Finally, we’d like to introduce some very young artists, who perhaps represent the future of this music: Bombino, the rising star of Agadez, and Tamikrest from Kidal, who are just beginning their career and are considered to be the “children” of Tinariwen.

A project conceived and produced by Sedryk