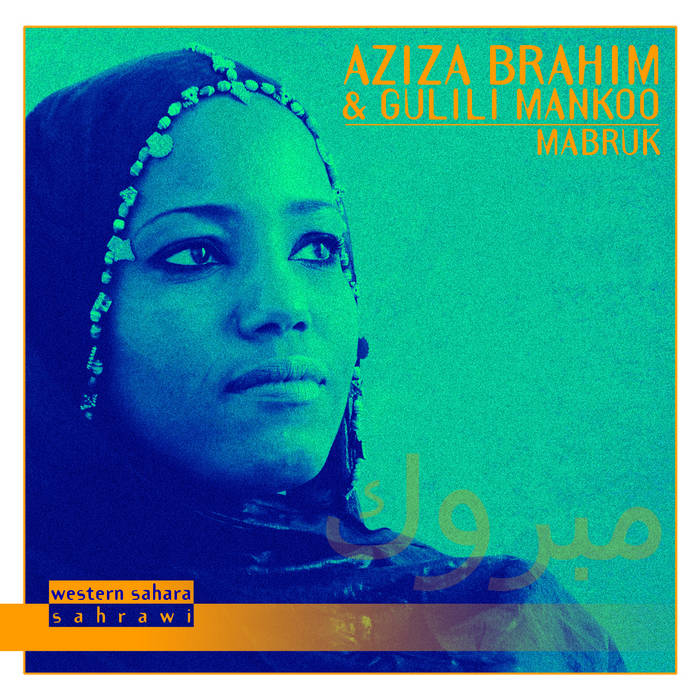 Shaggy Maggot I prefer minimalist 'making music' tracks with their particularly haunting vocals, but it's all good. Favorite track: Marhabna.

Aziza Brahim personifies the new voice of the Sahraouis, the people who resist and fight for their independence. These songs evoke exile, the right to liberty and the Sahraoui martyrs of the Polisario Front.

Sahraoui, Aziza Brahim Maichan was born in the refugee camps near Tindouf in Algeria. As a result of the Moroccan invasion, she has never been to her country nor knows her family who remain in the occupied zone.
In 1995, she joined the National Sahraoui Group and went on her first tour, which sent her to Mauritania and Algeria.
In 1998, the Spanish label Nubenegra released the trilogy entitled “Sahraouis” in which included two of her songs. In the same year, she performed her first European tour with the group Leyuad.
Since 2000 she has lived in exile in Spain, and has toured with Leyuad in Spain, France and Germany, occasionally sharing the stage with Ojos de Brujo and Cheb Khaled.
In 2005, she joined the group Yayabo Latin Jazz, which constituted her first experience of integrating Sahraoui music with the rhythms of the Caribbean.
Since 2006 she has worked on a new music project with the group Gulili Mankoo. The group, formed of Sahraoui, Spanish, Colombian and Senegalese musicians is a fusion of African, Sahraoui music with accents of rock and blues. They have toured throughout Spain, and other European countries such as the United Kingdom, Sweden and Denmark.
In 2009 the French label Reaktion released her EP “Mi Canto” the first recording of Aziza accompanied by Gulili Mankoo.

“Mabruk” is her long awaited first album. Aziza wanted to pay homage to her grandmother Ljarda Mint Mabrouk, a poet known amongst the Sahraouis, and has put some of her poems to music. They all evoke the struggle for independence of the Sahraoui people, the difficulty of living in exile and the heroic dead, lost in the cause of the Polisario Front.
Produced by Aziza, this album is a skilful blending of the t’bel, the traditional Sahraoui percussion instrument (“Ya Mulana”), with other musical styles: the blues (“Mohamed Yeslem”), rock (“Hamid Rabi”) and also funk (“Tank Sensation”). Acoustic and electric guitars and percussion coexist harmoniously, dominated by the powerful and vibrant voice of Aziza who sings alternatively in Hassinya Arabic and in Spanish.

The album is accompanied by a 16 page booklet which includes French translation of the songs, and with text by the Sahraoui writer Bahía Mahmud Awah on the history of his people.