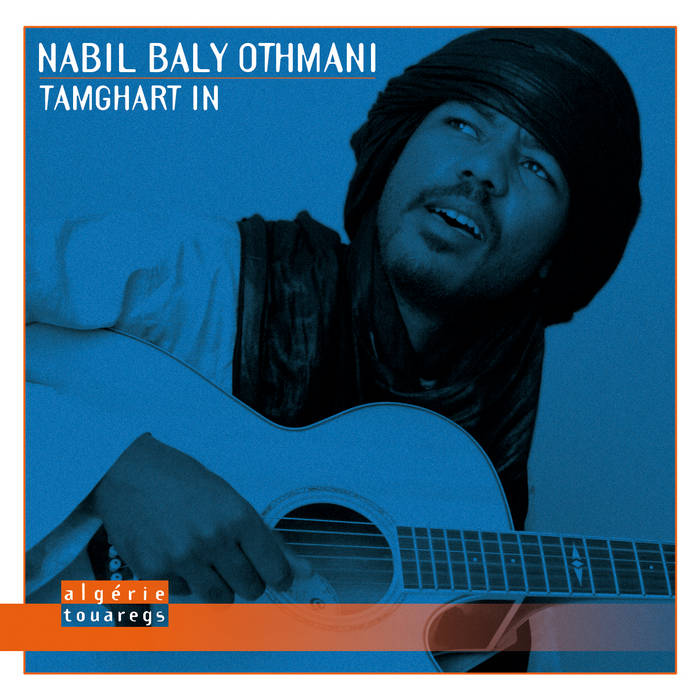 This first album solo of Nabil Othmani ends with notes on the electrified oud, showing that, while continuing the work of his father Baly, it is above all Nabil with his own style.
The family heritage could have been an awkward burden, but it is not a problem for him. At 24 years old, Nabil Othmani already has a marked style of his own, at the the crossroads of multiple influences: the traditional tindé of his grandmother, the Arab oud adapted to the Tuareg style by his father, the ishumar electric guitar as well as rock'n'roll and reggae.

‘Tamghart in’ (pronounced ‘Tamrartine’) is, because of this, a very eclectic album, which abounds in surprises. Of course, you will hear tindé, traditional Tuareg percussion (‘La Hellé’), as well as the oud, popularized in Djanet by Baly (‘Tamghart In’, ‘Nek Ahal Wagh’). Not suprisingly, Tinariwen-style electric guitar is present (‘Tamidit In’ , ‘La Hellé’ …).
But you will also hear there Arabian-Andalusian influences (‘Tamghart In’, "Anhedji’), reggae rhythms (‘Djanet’, ‘Tamarit in’), as well as unusual instruments not heard in Tuareg music : piano, cello, as well as a touch of electronic sounds and electric oud (‘Nek Ahal Wagh’, which closes the album by opening on new horizons).

‘Tamghart in’ results from the personal and musical encounter between Nabil and Sedryk (of the Reaktion label) for this artistic production. Recorded "at home", the disc reflects the friendship and bond between the two men. Nabil plays almost of all the instruments, doubles even triples the voice and guitar tracks with a disconcerting ease. Barka Beltou, his faithful rhythm guitarist, also takes part and some friends were invited to sit in, like Sanou Ag Ahmed of the Terakaft group. Nabil and Sedryk chose a mainly acoustic production, intentionally stripped down and airy, to evoke the vastness and great spaces of the desert, "the dearest of friends". The cadence of the of the camel’s gait is never far.

In addition to his own compositions, Nabil adapts a marriage song composed by his grandmother Khadija, a grande dame of tindé. He has also set to music several poems by Baly, who left him many unpublished texts. A true treasure trove with which he will continue to bring to life for a long time to come the spirit of the father who gave him his love of music and his creative gifts.

Produced by Nabil Othmani & Sedryk
Recorded & mixed by Sedryk in Lyon (France), between august 2008 and september 2009
Mastered by Choko at Supadope Factory