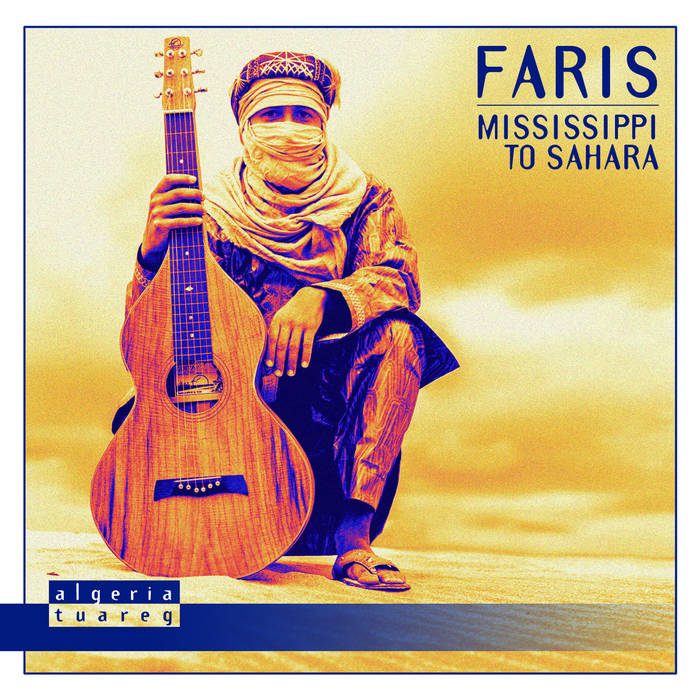 Album available on all the legal platforms (iTunes, amazon, spotify...) via Wrasse Records.

‘Desert Blues’ was a term created by music journalists back in the 90s to describe the music of Ali Farka Toure, Tinariwen, and others. But American blues really does have it roots in West Africa, particularly the Sahel and Sahara regions. Amongst the originators of the blues are the Kel Tamasheq or Tuareg people.
On this album, Faris brings 12 rural Delta blues songs back home to Africa, revisiting them in the guitar style known as assouf and showing how close the souls of these two worlds are to each other.

‘Mississippi to Sahara’ was born as the intitiative of Sedryk, founder of the French label Reaktion, which had already collaborated with some of the most prominent Saharan artists (Tinariwen, Terakaft), and often contributed in making them known to a western audience (Bombino, Tamikrest, Aziza Brahim). His idea: to interpret the term “Desert Blues“ literally by asking a Tamasheq musician to replay and adapt the old rural blues of the Mississippi in a Tuareg style.
Faris was the natural choice of artist for such a project. In fact, his mixed race status (Italian via his father, Algerian Tuareg via his mother) and his dual culture, Western and Saharan, makes him unique on the Tuareg scene. It was the discovery of Jimi Hendrix in his adolescence that brought him to the guitar, before he rediscovered his maternal culture via the world success of Tinariwen. A moment in his life that he describes as a 'revelation': “When I played Jimi Hendrix, or the blues, it always seemed like I was imitating something. But when I began to play this music, asssouf music, it was something that came very easy.“

The Reaktion label had already released the Faris’ first EP in 2011, 'Imeslan N Essouf' on which he was accompanied by his malian big brothers from Terakaft. In the process, he took his first steps on stage in front of his family, first in Tamanrasset (Algeria), then at the mythical Festival in the Desert in Timbuktu (Mali), with a backing band composed of members of Tinariwen. Despite his people’s recognition, he only revealed his tamasheq side, leaving his western culture in the shade. ‘Mississippi to Sahara’ allowed him to finally reconcile his Saharan roots with his love of American blues. While paying tribute to some of his heros (Blind Willie Johnson, Robert Johnson, Son House, Mississippi John Hurt… ), he also shows how one of the sources of the blues is situated in the Sahara, in the home of the Tuaregs.
Faris wrote new Tamasheq lyrics, keeping some of the original English verses. He arranged the songs in a very personal style, allowing the sensitivity of the guitarist and singer to emerge. Whether acoustic, electric or sometimes with a Weissenborn guitar (a first in Tuareg music), Faris reveals a way of playing with finesse and full of emotion. He plays all of the instruments with one notable exception: the presence on two titles of the octagenarian bluesman Leo Bud Welch, who’s role here is the link between the Mississippi and the Sahara.

The album was recorded in only three days, without any superfluous production effects, leaving it in the true spirit of the Delta blues: one voice, one or two guitars, sometimes with discreet percussion… An authentically stripped music, in the image of the desert, keeping only what’s essential: the nostalgia of exile, the pain of being far from your family and your land… The feeling experienced by Afro- American slaves under the name of the blues, and which the Tuaregs call assouf.

Ben Harper: "Mississippi To Sahara is a great record. I love it, and I love how it sounds. I can only imagine the wonderful songs to come from Faris in the future."

Taj Mahal: "This is the most amazing movement to happen with this great music! The welcome return home to Africa! Faris is amazing! And he is playing a Weissenborne square neck guitar!"