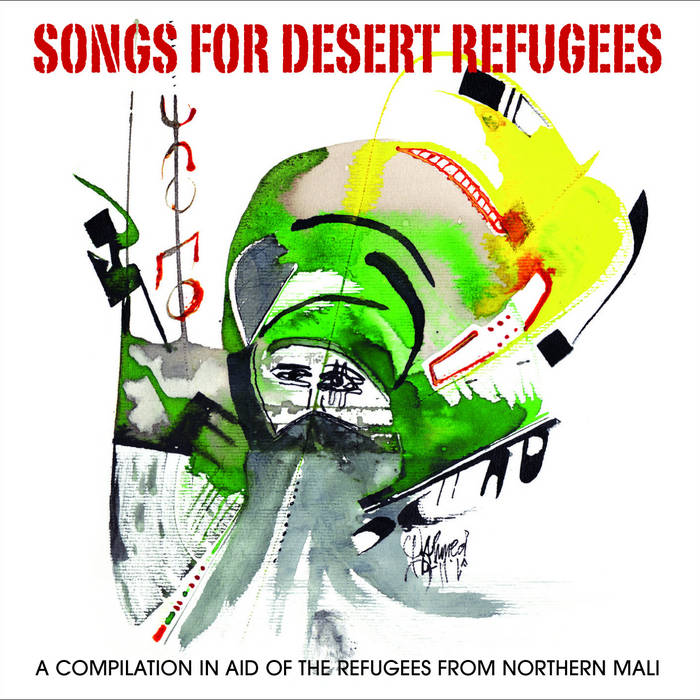 Album available on all the legal platforms (iTunes, amazon, spotify...) via Glitterhouse Records.

A compilation in aid of the refugees from Northern Mali

On January 17th insurgents fighting for the National Movement for the Liberation of Azawad (NMLA) attacked the town of Menaka in the far east of Mali. The fighting soon spread all over the deserts of northern Mali, provoking the most serious crisis that the country has faced since independence in 1960.
Tens of thousands of Touareg, Songhoi, Peulh and Arab people fled from the fighting to the relative safety of neighboring countries like Niger, Algeria, Mauritania and Burkina Faso. Riots in Bamako, Kati and other southern towns also forced Touareg and Arabs living in there to escape abroad.

The result is the worst refugee crisis in the southern Sahara for decades. The UN’s Office for the Coordination of Humanitarian Affairs now claims that at least 280.000 people have been driven from their towns, villages and camps by want and fear. Many of them of them are eking out an existence in camps across the border in Algeria, Mauritania, Niger and Burkina Faso. For them, life is on hold. Their animals and possessions have gone. Their future has narrowed down to the next handout from a government or NGO. And over the horizon drought and famine are looming.
'Songs For Desert Refugees' is a benefit album whose aim is to raise funds for refugees in and around the rural communities of Aguel’hoc and Tessalit in the north east Mali. Both villages have seen the fiercest fighting in this conflict and their nomadic populations are in severe distress. Many families have lost everything.

'Songs For Desert Refugees' features a superb mix of desert music, including rare or unreleased tracks by some of the world best known Touareg groups, from Mali (Tinariwen, Tamikrest, Terakaft, Tartit...), Niger (Bombino, Toumast, Etran Finatawa) or Algeria (Nabil Baly Othmani, Faris). The music on this compilation is the sound of what the Malian deserts can be; intense, joyful, beautiful, proud, poetic and peaceful. It is dedicated to all those who are working to make it so again.

All proceeds from the sale of this CD will go to two trusted NGOs who work with refugees in Northern Mali. The first is called TAMOUDRÉ and it works with nomads in the pastures around Tessalit, scene of some of the fiercest fighting in the recent months. TAMOUDRÉ helps these nomads to make their livelihoods more prosperous and secure, socially, economically and culturally.

The other NGO is called ETAR. It supports education projects and helps to protect and disseminate the beauty of Tamashek culture and to develop cultural exchanges between the desert and Europe. It is currently raising funds to build a cultural centre in Aguel’hoc, another community that has suffered a great deal in this war.
The money raise will be used for food, blankets and medicines. All involved in producing the album are giving their services for free.